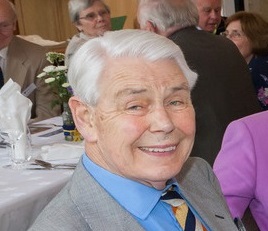 Brian died peacefully at home with Hoima and family in Ewhurst. His health had deteriorated in recent years with more than one spell in hospital, but all endured with his typical ‘grace and charm’ and Hoima’s support. Since Brian and Hoima married in 2010 and then moved to Ewhurst they became regular and popular supporters of OC cricket and other Cranleigh events.

After leaving Cranleigh in 1950 Brian trained as an accountant and then following National Service in the Royal Navy joined the RNVR and served for many years and kept his naval associations going through his life. He worked predominantly in the City in insurance and was a Lloyds Name. Subsequently he ran a removal company in Woking for a time but more to his taste and allowing full rein for his abundant charm and sartorial elegance enjoyed freelancing as a film extra with a non-starring part in Star Wars a highlight. There was talk amongst his
friends of modelling assignments, if so at the Tatler and Saville Row end of things, but not substantiated.

Brian was a keen cricketer and as a skilful seam bowler with a high action and late swing and a useful later order batsman played a good deal of OC cricket over some 20 years from 1955. He took 33 wickets at 25.61 without ever playing a full season. In subsequent years whenever he and Peter Shelley met up they never failed to reminisce about their last wicket stand of 83 to beat Oundle Rovers in an epic one wicket victory in 1971. Brian also played a lot of cricket for RNVR sides and Cranleigh CC, his local club. Cricket was his passion but he also played rugby at TD and took up golf in later years.

He was a consummate OC and a great friend to many of us. Of my many OC friends he was the best dressed (think Saville Row and Jermyn St.), the most charming and the only one who habitually turned up in a Rolls Bentley. He loved his OC life with its sporting content and if the Jubilee was his spiritual home he was an ardent supporter of TD events and never missed a Golden Oldies lunch. And he had, of course, an impeccable taste in clubs -OC Society, MCC and Naval & Military.

One of his nicest OC achievements was to take over the annual ‘Over 75s Reunion’ at the school, turn it into the ‘Over 70s’ to get some of us slightly younger chums in and in the years up until 2014 turn it into the big event in the OC calendar for us oldies that it is today. With his effortless charm he was the ideal organiser and host.

Brian summed up a lot of what is so important about OC life – A loyal friend, always good fun to be with and idiosyncratic in the best possible way. He will be much missed by Hoima with whom he spent such happy years and his sons Bruce and Barry and their families. I have raised a glass to Brian & Hoima most lockdowned evenings since 6 April and will continue the practice, particularly at the Jubilee and TD which he loved so much.