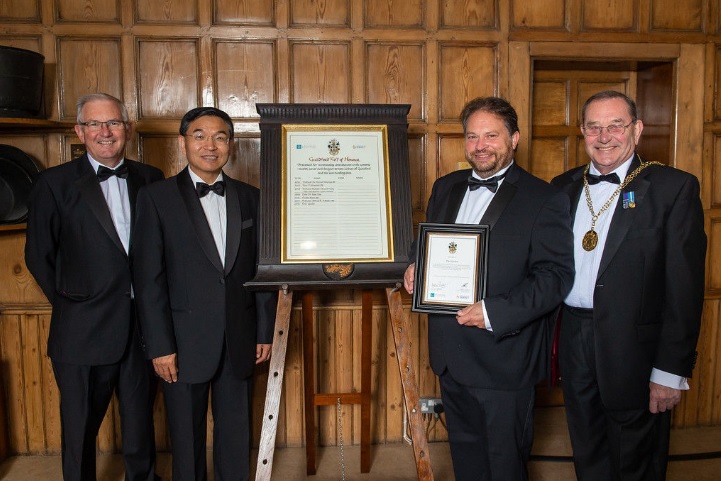 Peter Gordon (1 North 1985) has been recognised on Guildford’s Roll of Honour in recognition of the work he has done for the local community and his role with Eagle Radio.

The award was created by the University of Surrey and Guildford Borough Council in 2011 to celebrate exceptional individuals in the town.  It celebrates those who have made a substantial impact to the economic wealth, social wellbeing or artistic culture of Guildford and the surrounding area.

“As a Guildfordian, it is a true honour to now be part of the town’s Roll of Honour,  not least because of the esteemed company I now keep,” he said. “The bonus is that I appear to be getting recognised for things that I’ve absolutely loved doing – in fact, I appear to have received an award for enjoying myself ..  Hopefully others may feel it’s all been worthwhile too.”

He started broadcasting while at York University and after graduating worked for the local BBC station before returning to his hometown and working for County Sound, Radio Mercury, 106.6 Star FM and then in 1996 he founded 96.4 Eagle Radio. He still presents the breakfast show and is currently the programme director for 96.4 Eagle Radio and County Sound 1566mw. He is also deputy group programme director for UKRD (Eagle & County Sound’s parent group), which runs more than a dozen radio stations across the UK.

More recently he has become a regular in local pantomime. This year he is playing one of the ugly sisters in Cinderella at the Yvonne Arnaud.