We had another fantastic evening with both sides fielding their best players in an attempt to secure the trophy which was being played on the Old Courts for the last time.

The Old Courts were opened in 1979 with an exhibition match between Rahmat Khan (A squash player from Pakistan. He coached his cousin Jahangir Khan throughout his career. The partnership led to Jahangir winning 10 British Open titles and a spectacular winning streak of 555 consecutive matches) and Mohammed Yasin, a squash coach and retired squash player from Pakistan. One of the leading players in the game in the 1970s, Yasin was a finalist in the 1974 British Open. He retired from squash in 1975 due to an ankle injury. Yasin is very famous for beating World champion Jonah Barington and preventing him for equalizing Hashim Khans record of 7 British Open Titles at that time in 1974. He did not play the final due to his ankle injury while playing with Qamar Zaman in semifinal)….and they will be closing this year.  Replacement glass back courts will be opening in 2017 on the side of the sports hall.

The David Vaughan Trophy – This is now in its 4th year between Cranleigh School and the OCs.  David Vaughan was at the prep school and the senior school during the 1930s and is probably the most decorated OC squash player. He won many Club tournaments at Richmond, The RAC, Hurlingham as well as the GB Veteran championship twice. He was the President of the Jesters Club from 1995 to 2015. The Jesters Club is a club that enjoys ball games in a manner that fits the name of the club. He lived his life making friends though squash and real tennis and he inspired me to organise the Cranleigh School vs OCs fixture, 4 years ago.

So with both teams at their full strength the evening kicked off with some strategic positioning of the order of play!

A last minute call from Alistair Chesser (OC), who cancelled a career changing meeting in central London to make the match 6 string, threw Captain of the school Mr Bartlett into a blind panic!

First contestants on court were number 2 seeds, Lewis Bedford (Cubitt) vs Ed Coplestone (OC). This was grudge match born on the cricket pitch.

Both parties equally determined to prove the greater all round sportsman. Bedford in the upper fifth was hoping to use his youth and fitness to outwit ageing Copleston…to no avail as Coplestone took no prisoners and ran in a 3/0 win. One up to the OCs.

The 3rd string match had started on the opposite court with Benji Chesser (Cubitt – upper fifth) doing battle with new OC recruit Mat Harris. This was a fiercely competitive match with each game going to the wire and ended up falling Mats way 9/11 11/13 10/12. Two up to the OCs.

Also on was Leo Thompson (Cubitt – lower sixth) vs Mike Stonebridge. Thompson (17 yrs) had a strong start winning the first 11/5 but Stonebridge (71yrs) fought hard and won back the second 10/12.  Thompson soon realised the age gap was in his favour and kept Stonebridge running until he ran out of gas taking the 3rd and 4th 11/7 and 11/6.  2/1 to the OCs.

Next up Toby Chesser took to the court with Mark Robson (OC).  Robson is an OC stalwart and well known for his many facial expressions of agony as he concludes a point with a drop shot in the tin…..He was out of the starting blocks with the energy of a gazelle.  Going 2 games up Chesser saw a glimmer of light as Robsons’ drops into the tim became more regular and Chesser sneaked back the 3rd game 12/10 tipping the scales back in his favour….. Robson fought hard but lost the last 2 games 11-9 11-5.. Two games all.

Toby Rust (Loveday – Upper Fifth) up next to take on Veteran OC Alistair Chesser….Dad Chesser strategically avoiding playing either of his 2 playing sons to avoid the embarrassment of losing in front of the crowded gallery, took to the court hoping not to replicate the injures he incurred in the past few matches.

Rust (a tennis player at heart) – being egged on in the gallery by both Chesser boys, was not going to let the school or the family down, and he made it a clean 3-0 win. Chesser senior complaining he didn’t even get a chance to break into a sweat!!!

So with the match at 3-2 to the school, Captain and Squash master Mr Jamie Bartlett was up against Richard Winter. Bartlett was focused on reversing the result from 2 years ago. The match was a cliff hanger with Bartlett using drop shots and an excellent length to run Winter around the court.

Smashes into the nic and a determined grit in his step he took the lead. At 2-2 and after a very even match it was all down to the last game. Winter was lucky to grab victory from the jaws of defeat…11/5 in the fifth.

The match result at 3/3, The Ashes rules were applied and the OCs retain the title for another year.

A huge thank you to Carolyn Nichols for all her support and for scoring my match!  Thank you to all the Scorers and supporters – Mike Payne, Martin Williamson, John and Betty Parry and guest of honour Jane Vaughan who kindly made herself available to present the David Vaughan Trophy.

Sad that it will be the last match on the Old Courts but very much looking forward to christening the new courts with a Cranleigh School vs OC match in 2018.

On Tuesday the 24th November 2015 the 3rd annual contest for “The David Vaughan” Squash trophy between the schoolboys and the OCs took place at the school.

The schoolboys were keen to win this year and put a stop to the OC winning streak. They were on court already warming up as the OCs arrived for a 5pm kick off.

First up Rob Green (Cubitt) vs Mark Robson (OC).  Mark had fanatically practised for this moment since last years match to ensure his place in the squad as there are so many new OCs fighting for his place. Mark’s tactic this year was to conserve energy and only run for the ball if it was moving in his direction….fortunately for him it was in the first two games but Green realised the error of his ways and started to play more drop shots in the 3rd game leaving Robson rooted to the tee. So 2/1 up but on the back foot green could sense a come back, until out of nowhere Robson’s second wind gave him enough to snatch victory in the 4th 3 games to 1.

Meanwhile youngster Freddie Edwards (Cubitt) took to the court with Mike Stonebridge (OC), 55 years his senior! There was nothing in the first game but Edwards took it 11/10 (not sure how as you are supposed to be 2 points clear!). But wise old Stonebridge had spotted a weakness in the youngsters game and took the next 2 games to put him 2/1 up. Edwards wasn’t having any of it and fought hard to claw back the 4th and 5th.  A great match to watch and well played both.

On ct 1 Gregor McIntyre (Cubitt) was battling with new recruit for the OCs Rod Kohler.  Kohler’s power and shot selection won him the first

game but McIntyre, determined to spoil the Kohler family party (with his two daughters watching from the gallery), fought back hard and took advantage of the PAR scoring which has clearly confused Kohler. McIntyre taking the next three games to a very close victory 11/9 11/7 12/10.

So with the schoolboys 2/1 up it was down to the No 2s to battle it out and Lewis Bedford (Cubitt) stepped up to take on veteran and team captain Alistair Chesser. Chesser again with family on the balcony was keen to keep the match short, and narrow the risk of injury or fatigue.  3/0 to Chesser. Boom!

So with the match level at 2/2 Jamie Bartlett and Carolyn Nicholls played their trump card and put Ollie Pope (Loveday) out to bat against old timer Reg Langmead.  Ollie, a keen cricketer, had spent the year practicing and had risen up the batting order from No 5 last year to take the no1 slot.  Langmead, held together by straps and braces, looked more like he was about to face Pope at the crease! The first games were very close but Langmead’s shot selection outwitted Pope, but in the 3rd game Pope threw a couple of googlies and a reverse sweep to snatch a game back. Langmead had to pull out all the

stops to prevent a collapse in front of a crowded gallery, including stalwart OC liaison officer Mike Payne and battled hard to win the 4th and the game.

So the OCs retain “The David Vaughan” trophy for the third year running.

A high thank you to Jamie Bartlett and the school for organising the match which was playing in superb spirit. 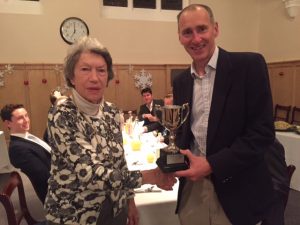 We were all delighted that Jane Vaughan was able to join us to present the trophy to the OCs over dinner in the dining hall, where the discussion turned to next years match at the new courts which are due to be ready in September.