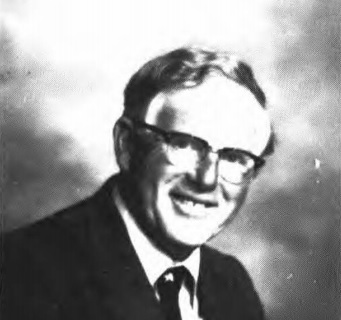 Tim came to teaching late. He had served in the Royal Engineers in World War Two and remained in the army until 1964 when he decided to switch careers. A mathematician who had studied at St John’s, Cambridge,  he joined Cranleigh that autumn and he threw himself into most aspects of school life.

He was affiliated to Cubitt, standing in as housemaster for one term when Lance Marshall was on a sabbatical, and in 1968 he was appointed housemaster of West, at the time one of the main sporting houses. “Tim was determined to do his utmost to maintain this success while at the same time encouraging the less talented,” Brian Dimmock MCR 1957-1996) recalled. “He would always support, and actively help, his captains of games while persuading the duffer to produce of his very best. At the same time he was keen to stimulate activities off the games field so that all members of his House were able to feel that they had something of value to contribute, and that this would be noticed and appreciated. He was a tolerant man of great patience, but he was not willing to accept feeble excuses or second-best if he felt an individual could make more of himself.

“It was typical of him that when the time came to give up the House, although he decided to live in East Preston, he did not take the chance to ease up. In spite of the hour’s drive he was one of the first to arrive in the morning and he agreed to take over the Careers advice, as this was an area that could be further developed. Very many Cranleighans owe Tim a debt of gratitude for the time that he was willing to devote to their guidance. He would always point it out, kindly but firmly, if he felt their plans were over-ambitious in the light of grades obtained at O level and likely at A level, but able and willing to make sound suggestions and give encouragement where that was needed.

“Above all, though, I will remember a patient and gifted teacher at all levels in the School who had the rare talents of being able to stimulate the bright Fourth Former, help a struggling Fifth Former and soundly cope with the demands of A level Mechanics. He had a clear view of his objectives for the School, and did not allow himself to be deflected from what he knew to be right by the false glitter of the latest educational trends and fashions.”

Tim also took over responsibility for tennis, at the time a minor sport with few matches, soon after his arrival. For some years he was responsible for coaching the first team, helped by a professional coach, and rapidly built it up to be a major sport attracting about half of the School and running teams at all age groups. It was his initiative that started the Prep Schools Tennis Festival.

He was always ready to lend a hand wherever help was needed, and he was called upon to fulfil many administrative tasks, from organising new boys’ medicals and school photographs to chapel seating and car parking on big occasions. All were meticulously performed.