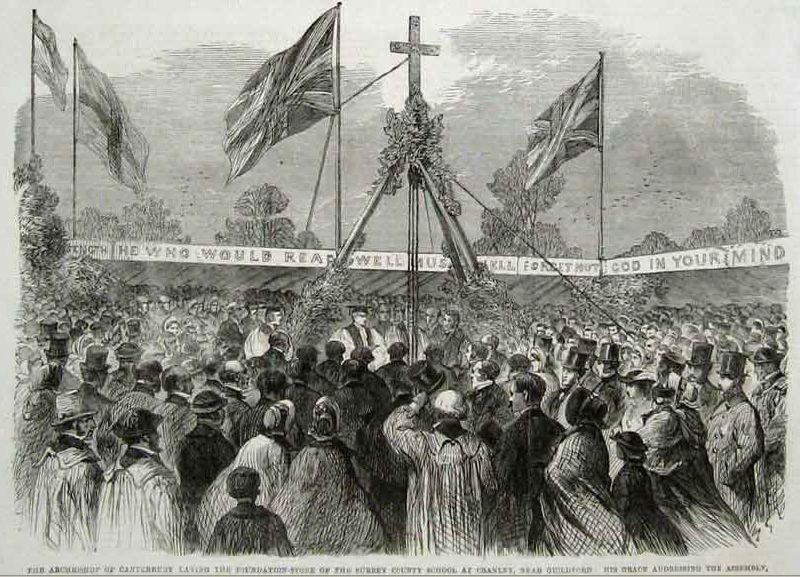 On Wednesday, November 25, 1863 the Archbishop of Canterbury, assisted by the Bishop of Winchester, laid the foundation stone for Cranleigh School.

It was a little over a year since a meeting in Guildford had first raised the idea of a new school at Cranley.  That meeting had established the need for a school to provide “a sound and plain education based on the principles of the Church of England and on the public school system for the sons of farmers and others engaged in commercial pursuits”.

Although Cranley (it did not become Cranleigh until 1867) was a remote and largely inaccessible village, plans for the Guildford-Horsham railway with a station at Cranley had already been approved by parliament and that new link was key to the decision to build the school there.

Although by late 1863 only £4000 of the required £9000 had been raised, that was enough to convince the founders to proceed.  And so in late November, a large gathering made their way to a remote hill in the Surrey countryside for the foundation ceremony.

The location had been chosen carefully, slightly detached from the village, and being on a hill benefiting from stiff breezes which would blow healthily through the corridors.  The Victorians believed in the benefits of fresh air.

Those attending had a difficult journey, either walking the eight miles from Guildford or taking an uncomfortable journey on rough roads in a fly. When they reached the village they had to walk up the notoriously muddy track which is now Horseshoe Lane to the site of the School.

It seems likely there were only a few dozen in attendance even if the drawing in the Illustrated London News makes it seem more of a major gathering.

The ceremony started at 12.15pm with prayers conducted by Rev J Sapte, the rector of Cranley and one of the founders.  “The stone was then lowered, the mortar spread and the other preliminaries gone through,” reported the Standard.  The Archbishop of Canterbury then said: “In the faith of Jesus Christ and in the name of the Father, and of the Son, and of the Holy Ghost, we lay this foundation stone. Amen.”

The Lord’s Prayer was then said followed by the 144th Psalm and a speech from the Archbishop of Canterbury in which he hoped the future scholars would receive a “sound education, a moral and religious teaching in conformity with the doctrines of the Church of England”.  The Bishop of Winchester then gave thanks to the Archbishop and the main party then headed back to Guildford for what was described as “a sumptuous lunch” at the Angel Hotel.