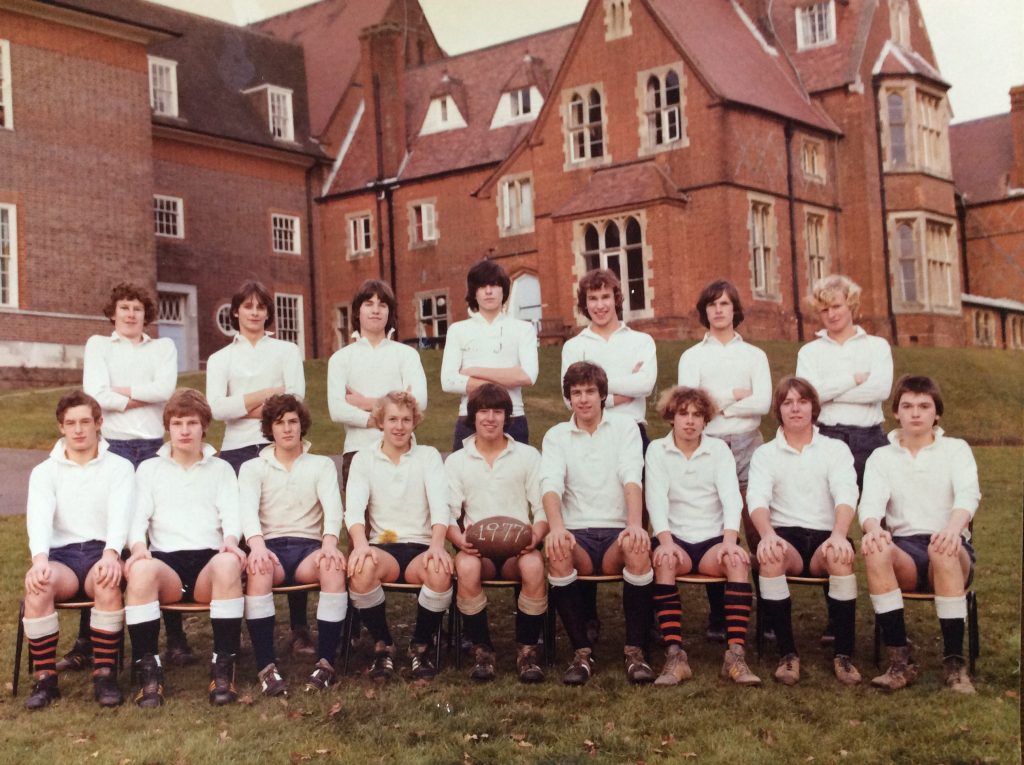 Philip Goodnow (1 North, 1977-1978) attended Cranleigh as a British American Educational Foundation (BAEF) Student and shares his memories of his experiences.

“In the late 1970s I was a member of New Kids on the Block at Cranleigh School!   Wait, do you mean Donnie Wahlberg’s Boston boy band that meteor-ed into fame during the early 1990s?  They came to Cranleigh? Really? How can that be? Well, not exactly.  In September, 1977, I arrived on Cranleigh’s doorstep as a British American Educational Foundation (BAEF) student having already graduated from a “Cranleigh-esque” school in Massachusetts. I was the “new kid on the block” at Cranleigh or, as Glen Frey of The Eagles wrote, I was the “new kid in town.” Not only was I the new kid, I was the only residential American at Cranleigh. There may have been a few US passport holders at Cranleigh, but they sounded as American as I sounded British.  How and why did I become a BAEF “scholar” and what was my Cranleigh experience?

“The BAEF, a non-profit organization that assists Americans in securing admission and studying in British boarding schools, was founded in 1966 by Ms. Denise Bryan. In the spring of 1977 I was 17 years old and not ready to attend university. Instead, I interviewed with Ms. Bryan in her New York City office which was cluttered with catalogues, brochures, applications, etc. pertaining to her work of placing American students into British “public” schools. The interview centered on my family and academic backgrounds, particular interests, mostly sports and music, and my aspirations for college. She concluded the interview with, “I think I have just the school for you. I will be in touch.” A week or so later, Ms. Bryan phoned to say that Cranleigh School had agreed to admit me for one year. The school’s glossy photos – pastoral campus, stately architecture, healthy young students in the classroom and on the playing fields – arrived in the mail and whetted my appetite, so I began making plans to spend the next school year in England.

“After the flight to Heathrow and a night in London with the 18 or so other “scholars”, I received my marching papers from the BAEF London office. I, along with a year’s worth of clothes, boarded the train from Waterloo Station to Guilford where I was greeted by the very cheery and rather bouncy Dr. Alvin Megahey, my 1 North house parent. We crammed into his small vehicle for the seemingly death defying drive (left side of the very narrow road at high speeds) to Cranleigh. We unloaded in front of 1 North where I was naturally first introduced to Matron, posted in her laundry room on the second floor, and some of the other Upper Sixth Formers: Iain Wilkie, Ian Harper, Chris Meredith, Alex Klem and my roommate, Nicky Wilks who would all became good friends that year. That evening Dr. Megahey invited us to his apartment for sherry, and asked if I preferred dry or medium. Let’s just say that sherry is not a popular drink among American teenagers. Nicky kindly agreed to share his third floor room for study, but I slept in the only vacant bed in 1 North in the Fourth Form dormitory. (Later in the year I moved into my own room on the second floor overlooking the field hockey pitch.) During the first few days I stuck out like a sore thumb because my gray trousers (not pants) were light gray rather than charcoal gray, I didn’t own the uniform gray suit or the proper tweed jacket, and my sweaters were too flashy. Furthermore, my jackets were unadorned with the symbols of achievement at the house and school level that ALL the others seemed to have. A visit to the school shop remedied my sartorial shortcomings, but the jacket pocket adornments would take time, and some blood, sweat and tears…literally.

“Since I would only be attending Cranleigh for one year, I chose two (rather than three) A-Level subjects, English Literature and Music. While I was over my head in music, the English literature curriculum was a good fit. I quickly jumped into extracurricular activities where I knew I could shine: interscholastic rugby (2nd and 3rd XV) and athletics, every house team (except cricket), the musical Face Value written by Cranleigh’s own Michael Tolputt, auditioned for and was selected in the orchestra, and sang with Nicky’s student directed performance of Benjamin Britten and Bach. I also became a regular at The Buttery. Funny story. The evening of The Buttery’s opening, Iain Wilkie and Ian Harper found me in One North and asked if I would like to go to The Buttery, or “Butts” as it was called. Having no idea what a Buttery is I tagged along, only to find myself in a lounge adjacent to Mr. van Hasselt’s office just off the main quad hoisting a pint. Had I been pulled through a space wormhole into a parallel universe? Was this an underground, black market operation? Was I being set up or tested? Everyone seemed relaxed and convivial, enjoying a drink or two prior to dinner, so I did the same. My classmates were bartenders who accepted tickets in lieu of cash.  How civilized. Leave it to the British. Needless to say, my year was definitely looking up.

“The academics at Cranleigh were challenging, especially since I was attempting to complete the two year A-Level preparation in one year. My teachers were very welcoming and effectively accommodated my delayed start to the AP curriculum, and succeeded in helping me pass my A-Levels. But the academics were truly secondary to the whole Cranleigh experience. I made many good friends apart from those already mentioned: Guy and Scott Sutherland, Dave Mundy, Dave Middleton, Rick Edge, Liz Farrant, Anita Staines, and many more. Holidays were spent touring London and staying in hostels, trekking throughout England and Wales, spending two weeks skiing on a school trip in Verbier, Switzerland, travelling across Holland, West Germany (those were the 1970s) and France, and working on a Berkshire estate.  I learned to appreciate British cuisine at Cranleigh: bangers/fish/chicken and chips (lots of chips); stewed tomato, baked beans, and fried bread for breakfast; Marmite as introduced to me by house friend Anita Staines; warm beer; bubble and squeak; cream at the top of a bottle of milk; tea and biscuits in the dining room; and McVities Digestives. I tried some new sports: rugby and field hockey (as a lifelong ice hockey player I especially enjoyed field hockey). Iain Wilkie and I paired up for regular Eton fives battles against Dave Mundy and Dave Middleton. I appreciated Iain’s and both Daves’ patience as I learned the skills and strategies of that wonderful game. As an American it was assumed by my housemates that I was a good basketball player and a good swimmer and should, therefore, be the house captain of those sports in inter-house competition. My swimming skills are just north of survival rated, and I have always been one of the certifiably worst basketball players in the Western Hemisphere. Still, we managed to win a few games in the old gymnasium where you couldn’t shoot from the corners under the overhang.

“As a result of that year, I became a much more confident and resilient student, fully prepared to lock horns with four years undergraduate study at Davidson College in North Carolina, USA. I earned my undergraduate degree in history in 1982 and my Masters Degree in Education from Harvard University’s Graduate School of Education, both of which I used as a teacher, coach and History Department Chair at three different secondary schools for 32 years. I am now semi-retired. Lawre and I married in 1983 and we will be celebrating our 35th anniversary in October, 2018. We have three children age between 21 and 29, one son in law, and one golden retriever. We live on the Rhode Island coast in New England. My days are spent practicing music (I am a professional musician in a wedding band), writing, and working on our property.

“I owe a great deal to Cranleigh, its fine teachers and welcoming student body. Cranleigh and the challenges of spending a year without the immediate assistance of my home and family taught me the following. I stopped enduring the present and wishing time away so I could move on to the next experience. I chose to breathe the air of the moment at Cranleigh and soak in the complete experience. I also learned that I was as self-reliant as I thought I was. Cranleigh presented many social, emotional and intellectual rigors and to find success I would have to be open, humble, respectful, reliable, a hard worker and a good listener. On a slightly more abstract level, as a diplomat for the US I learned the importance of making a good first impression. That’s not to say that I wasn’t all of these before September 1977, but the foreign setting but these skills to the test and had to be practiced every day, all year.

“Sadly, the BAEF has fallen from its heyday in the 1970s and 1980s as the cost of education in the US has outpaced inflation by a significant margin so an extra year is fiscally burdensome for most families. Yet I feel incredibly fortunate that I was afforded this opportunity at that critical time of transition out of adolescence. Cranleigh was the right place filled with the right people and programs, and came at at the right time to propel me into adulthood. I am forever indebted to Cranleigh for helping me along that path.”