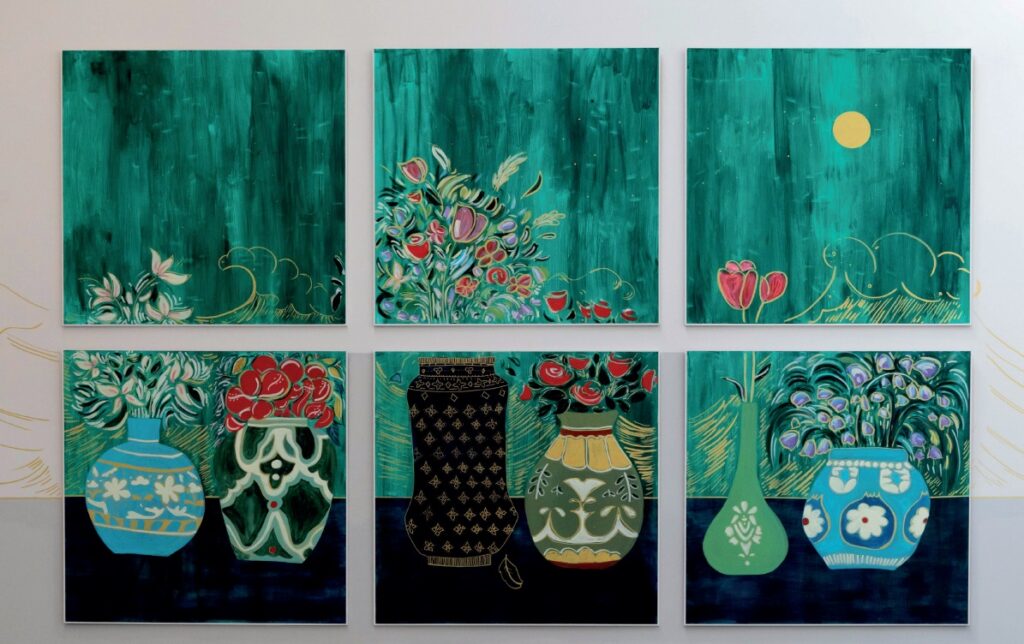 When I left Cranleigh in 2015 I knew I wanted to pursue a creative career in art. At School I wanted to do art all the time; in lunch breaks, after lessons, on weekends.
There was loads to get involved in at Cranleigh so I got into things like drama, sport and singing as well as my art. I am dyslexic and very visual, so I find when I struggle with words, I channel my emotions into my art.

In January 2021 I was awarded the Nabil Nahar commission to produce a memorial artwork for the School following a request for Old Cranleighan art undergraduates and recent
graduates to submit proposals for their ideas for a memorial. Two years ago, former pupil Nabil Nahar (Loveday 1991) died tragically young, aged just 45. At School his interests lay in the arts and as a businessman he acted as an art broker, running his own art gallery in Kuala Lumpa. His Old Cranleighan friends came up with the idea of commissioning an artwork for the School as a way of remembering him.

I wanted to draw on community, higher belief and harmonious places. I came up with the idea for the piece Houses of Harmony initially on the tube. The Houses of Harmony
concept was inspired by Mastura Abdul Rahman’s mixed media collage House of Flower, House of Harmony (1999). I saw some work by an artist I admire, Corey Mason, who uses plant pots as imagery. Nabil was dedicated to his Islamic faith which I was able to reflect using this representation. During my History of Art degree at Bristol University I studied Islamic pots, so I have an understanding of the symmetry with the natural world that is reflected in Islamic art. In many cultures flowers are a symbol of memory, placed on graves at funerals and the like. It was fitting that flowers would be an anchor for the memorial of Nabil. I was given the opportunity to speak with Nabil’s sister, so I was able to incorporate these with subtle sprinklings of his personality. The waves in the background were inspired by one of Nabil’s favourite artists Teamlab and more specifically his work, Black Waves. His favourite flowers and colour are there for those who knew him, though the piece serves a higher purpose as a memorial to all.

The very emotional process of working on this commission to honour an OC evolved my natural style, which was an extremely humbling experience. The painting represents a new beginning for me but someone else’s end. The sheer scale of the commission is much larger than work I am able to do on my own. The size of the piece allowed me to express my
ideas in a very natural way. I chose a colour palate that was sympathetic to Cranleigh using the Cranleigh blue and gold as yellow. I enjoyed the process of doing something different and as a result I draw flowers much more now. My natural style has always been to tell stories as the background to any piece so I have a very rich background. I usually work with surreal, rhetorical ideas, but this was, by nature, very real. My art A Level and History of Art degree at the University of Bristol gave me time to explore characters that pop up, for example, a girl in a shower with a plant pot. My work is very much a visual dialogue.

I have grown so much as an artist since being awarded this commission. It has really hit home how far I’ve come; I have stayed true to the foundations laid at Cranleigh. If I had told 13-year-old Kimi that I’d be doing a memorial piece for an OC five years after I left she wouldn’t have believed it. It feels like a full circle as I gave every spare second of my time at School to my art. I have big plans for exhibitions and shows in the coming year, and I would like to do a residency in Holland where my family is from.
One of the biggest things I learned at Cranleigh was to put everything into my passions and take every opportunity. Without Cranleigh I wouldn’t have been able to put everything into my art, it set me in good stead to have art as my career