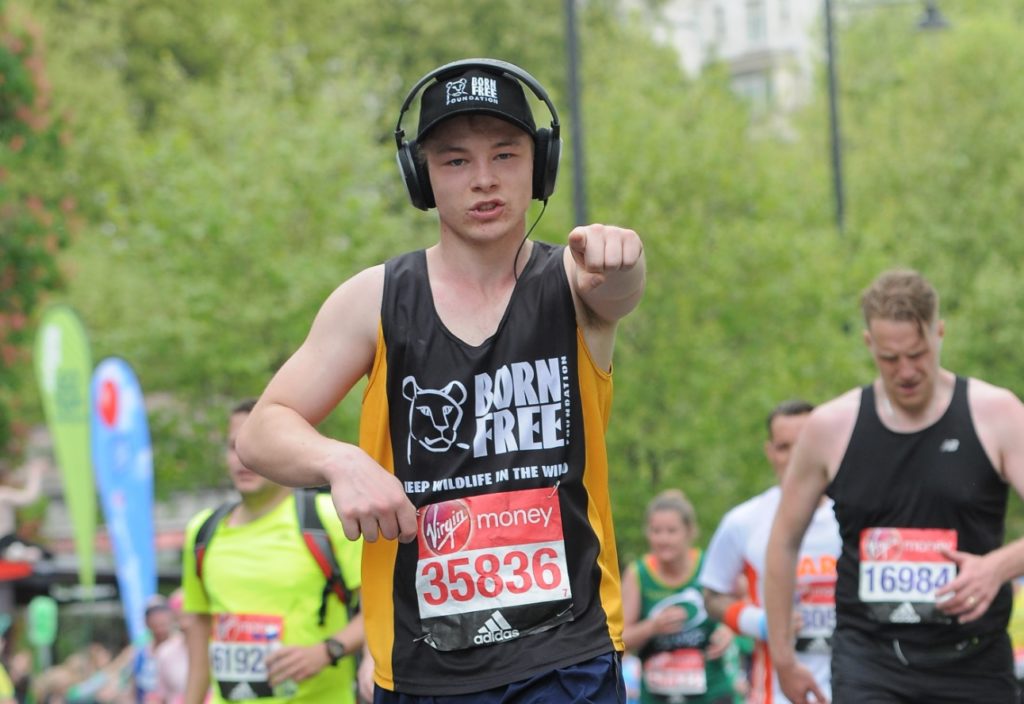 There are at least six Year of 2017 leavers running in the 2020 London Marathon which is amazing from a single year group. Among these is Lewis Bedford (Cubitt 2017) who is running in April with three other OCs for the David Shepherd Wildlife Foundation.

Lewis is not running for his own charity – The Sockstar Project – because they could not get a guaranteed place, but he was aware there were reserved places for the David Shepherd Wildlife Foundation (DSWF) and secured one of them. While raising money for DSWF, his aim is to increase awareness of the difficulties facing wildlife rangers.

Chatting with some of his school friends, they said they were keen, and now he has been joined by Angus Dahl, Sam Dickson and Jemima Stephenson. “I didn’t have to inspire them at all,” Lewis said. “They came to me and said they’d love to run it but they didn’t have a place so it made sense.” While those three will be running in the standard kit, not so Lewis.

“I felt that this year I had to do something different so I’m running it ranger boots and gear,” he said. “It’s hard and it’s not cheap as you really mess your feet up. I need to build up a tolerance in my feet, ankles and thighs. There’s slightly more give than parade boots and they’re a little lighter but it’s still daunting.

My whole pitch on fundraising is that I am doing it these boots as rangers do. Those guys run 20-25 miles a day in their boots. And then they do the same the next day. I am doing it for one day to try to show what they are going through.

This will be Lewis’ second London Marathon. He ran his first while in the Upper VIth and it did not go well. He sustained a serious foot injury in the days leading into the race and on the morning of the Marathon hardly able to walk. Willpower and co-codamol provided by his father after four miles got him through the rest of the course. “Everybody knew I was running and was wishing me good luck so I know whatever it took I had to finish whatever it took. I felt dozy and by the second half I was completely numb.”

He admitted his training regime was all wrong and he started serious running far too late. This time he has consulted Cranleigh’s strength and conditioning coach Simon Brearley and he feels far more conscious of what he needs to do to avoid the same problems.