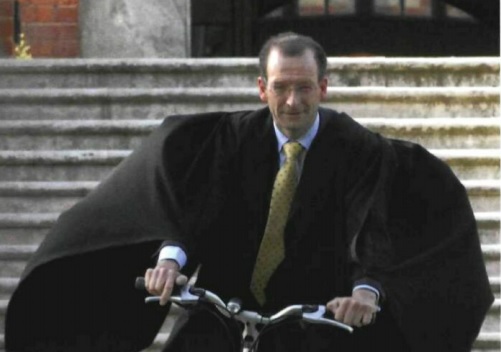 Paul was Head of the Modern Languages department at Cranleigh for a decade before moving on to the Leys School in Cambridge where he had been Director of Studies since 2010.

Here we reprint Gordon Neill’s valete from the 2010 Cranleighan.

If one should ever turn to a pictorial dictionary and look up the phrase ‘gentleman schoolmaster’, one would almost certainly find themselves peering in approbation at the figure of PJC. Bald of pate, bespectacled and slight of figure, he has cut an anachronistic figure in this age of ipads and ipods and I can almost hear him now, spluttering in indignation: “l-pad? !-pod? Preposterous! Sounds like a junior Latin lesson!”

Yet he always managed to defy and transcend the stereotypes, as generations of grateful Cranleighans and, in particular, Cubittians will testify, for amongst Paul’s innumerable qualities is his ability to take a genuine interest in those things which are of great interest to his pupils and yet which, per se, leave him rather cold. It was in his capacity as a fellow Cubitt tutor that I first got to know Paul and I was then, as I am now, simply staggered by the amount of time and commitment he gives to those under his tutelage. He has an astute understanding of the teenage mind and also a remarkable capacity for empathy, in spite of what might initially strike IVth Formers as a rather remote, scholarly persona. They soon grow to learn that PJC, as he is universally known, has a most sharp and whimsical sense humour and a keen eye for the absurd which makes him a quite peerless caricaturist (I wouldn’t quite say mimic – his impersonations seldom sound like their target but they seem to capture their character quite perfectly!). Some of these qualities may have been acquired in his early years teaching at Cranleigh Prep School alongside other legendary figures such as Christopher Perry.

PJC has been a phenomenally popular presence in Cubitt and has always been over- subscribed by VIth Formers wishing to choose a tutor. His valedictory House prayers at the end of the Summer Term, 2010 was a genuinely emotional occasion and left no one in any doubt of the affection in which he has been held in Cubitt, by boys, tutors and matrons alike, and he thoroughly deserved the award of his House shield.

No House play would have been complete without a ludicrous cameo from PJC. Whether it was holding a leek whilst wearing an extravagant moustache, or hamming it up outrageously as an enigmatic Russian music master, his appearance on stage would invariably provoke roars of approbation and mirth. PJC was also a much-valued member of the Chapel Choir, bringing his deep love of music to rehearsals and services alike and underpinning the bass line with the same quiet strength he added to the Music Department’s supervision on Cathedral trips and foreign tours.

He has led the Modern Languages department for ten years, during which time he has overseen the relocation from the old Rhodes Block into the marvellous new Emms Centre. As a Head of Department, he has been utterly selfless and committed. A firm believer that a knowledge of foreign tongues is an essential civilising force, he has communicated his knowledge and passion to countless of scores of Cranleighans over the years, always with academic rigour but also, invariably, with good humour and enjoyment. As the years have gone on, to his department’s amusement and delight, his department meetings have become increasingly brisk and irreverent, as his rise up the ladder of academic management has only sharpened, rather than decreased, his sense of the absurd. He has been – time to take a deep breath! – Assistant Head of Academic Administration, Assistant to the Director of Studies, Master-in- charge of Oxbridge applications and Master-in-charge of internal examinations, the duties for all of which he has discharged in a characteristically meticulous and efficient way.

He has always scoffed at team sports, describing rugby as “all that running around in the mud and falling over”. I can only infer from this that it is the ‘falling over’ bit which he does not like for, as Master-in-charge of cross country for many years, he encouraged many of the boys in his charge to view ‘running around in the mud’ as excellent sport! As with everything else he did, PJC’s administration of cross country was exemplary. He is also no mean runner himself: his performances in the senior cross-country race are always impressive and I recall him using these abilities to impressive effect one evening when SDB and myself tried to persuade him back to the bar for one last drink.

In many ways, it is Crosfield the bon viveur I will remember the most. Always a man for a glass of red (“Oh go on then – just a drop!”), many of my fondest memories of PJC will be the most entertaining conversations on Tuesday nights, after his duty, when we would put the world to rights over a bottle of something decent and laugh at the various ludicrosities of Cranleigh life, and when 1 would never fail to be impressed by his intimate knowledge and understanding of boys and Common Room alike; sometimes expressed in admiration, more often with the irreverent wit for which we will all remember him.

He leaves Cranleigh for the Leys School in Cambridge, who have been wise enough to snaffle him up as their Director of Studies. It is a thoroughly deserved promotion and one for which Paul, with his unflagging commitment to academic standards, is ideally suited. It has been a pleasure and a privilege to have worked with him over the years and it is with bewilderment that many of us have viewed his departure; it is genuinely impossible to see how he can be replaced.