There has been no sport in the last three months although there have been some promotion and relegation decisions decided.

The OCHC men’s 1st XI had their promotion into EH Division One South confirmed.  Although they had already won the Western Conference before the lockdown, they had to wait more than a month for the results to be confirmed.  There was a longer delay for other sides before promotions for the Ladies 1st XI into Surrey Premier for the first time, while the Ladies 3rd XI also went up after a remarkable season which saw them take two points from their first five matches and then go unbeaten for the remaining 14.  There were also promotions for the Men’s 2nd XI – unbeaten since mid October – and 5th XI – unbeaten all campaign with a tantalising title decider against Sanderstead falling victim to the early end to the season. 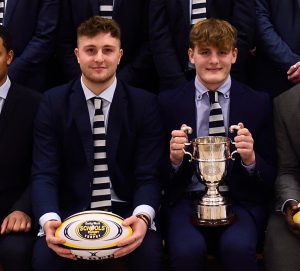 The OCRFC 1st XV were relegated after losing a series of games in the final minutes. “The Covid close down nailed the coffin lid, giving us no chance to rectify the position as the league was shut down,” explained chairman Will Fawcett. “As an aside, the leagues will be restructured in the 2021-22 season. This would have been this coming season, but with lockdown came the decision to wait a year before restructuring, so Mark was half way to appreciating the position. We have welcomed several more recent OC players, and can look forward to a decent season this time around, whenever that starts, with October looking possible.”

The OCCC cancelled all matches until the end of July but are still hoping to be able to fulfil two late-season club games and there is a prospect of a re-arranged fixture against the School as Cranleigh plan to play cricket for the first month of the Michaelmas Term.   The OC Golf Society, which should be in the midst of celebrating their centenary, have had to cancel all fixtures.  Both the Cricketer Cup and Halford Hewitt competitions were cancelled as well.

In the world of rugby, 2020 leavers Oscar Beard and Will Trenholm (both North) both hooked up with Harlequins straight after the end of term after securing contracts with the club. Read more

Another 2020 leaver, Greg Slade (Cubitt), was named by the Lawn tennis Association as one of 12 players selected for the Wheelchair National Age Group Programme – the wide-ranging package of support designed to help high potential wheelchair players’ progress towards future international success.

In cricket, Ollie Pope (Loveday 2016) featured in the newspapers keeping fit running in the hills near his Farnham home with Dexter (the family Labrador). He is in the England squad for the Test series against West Indies which will start at a spectator-free Lord’s on July 8th.

In hockey, Izzy Petter, who should have been preparing for the Tokyo Olympics, was named as one of 12 women’s sports talents ready to take the world by storm in the Daily Telegraph in May.