OC sport resumed after the third lockdown and the last three months saw the stop-start hockey season finish, albeit with only the ladies’ sides resuming their leagues . The highlight for the OCHC was the Over 40 side winning the England Hockey Over 40s Plate in the national final at Nottingham in July.

The OCRFC’s league seasons never got off the ground although the club hosted a very successful Sevens tournament in April.

The OCCC reached the quarter-finals of the Cricketer Cup with home victories over Felsted and Stowe before losing to Oundle. A few early-season games were cancelled because of restrictions but the centenary Cricket Week took place in July, albeit with no catering or bar and marquees having to suffice in the absence of the out-of-bounds pavilion. 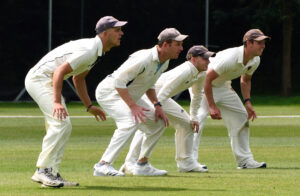 The OC Rifle Club met with the School for the first time since 2007 in June and recorded a convincing victory to win the Eilley Trophy.

The OC Golf Society has resumed and in July a group played at the School to mark the installation of new tee markers on the golf course, kindly donated by the OCGS.

Two Cranleighans – Izzy Petter (South 2018) and James Gall (Cubitt 2012) – are in Tokyo for the delayed 2020 Olympics with the Great Britain hockey squad and we wish them both well.

In rugby, Oscar Beard (North 2020) made his full debut for Harlequins in May and was unfortunate to pick up an injury in the game which kept him out of the remainder of the season. Jack Johnson (East 2017) has signed a professional contract with Worcester Warriors in the Premiership while Bear Williams (North 2019) has joined Cornish Pirates on a one-year deal.

In cricket, Ollie Pope (Loveday 2016) had a spectacular start to the summer with a double hundred for Surrey and played both Tests for England against Sri Lanka before sustaining a thigh injury which will keep him out of action until August. Michael Burgess (North 2012) turned in good performances with bat and gloves in his first full summer with Warwickshire after his move from Sussex and was rewarded by being given a two-year contract extension. In April, Stuart Meaker (North 2007) made his 200th career appearance in Sussex’s Championship match against Lancashire.

Will Barnicoat (North 2019) won the Under-20 3000m at the Muller British Championships in June and a month later came a hugely impressive fifth in the European U-20 Championships.