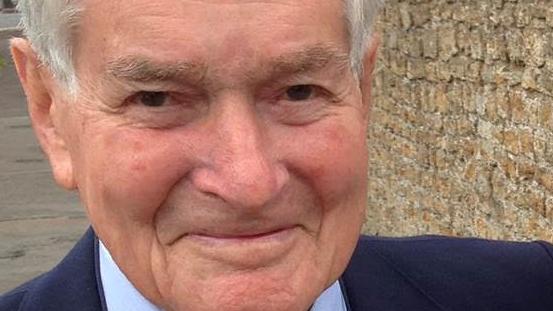 We are very sorry to report that Talbot Bashall (West 1943) died on September 6th aged 94. This obituary appeared in The Times on September 29th.

“It is reported that two ships have recently left Hanoi with 10,000 refugees each aboard. No 1 Typhoon signal hoisted and soon the proverbial will hit the fan.” So read the diary entry for June 6, 1979, of Talbot Bashall, the man in charge of Hong Kong’s reception of Vietnamese refugees.

These “boat people” set out across the South China Sea to escape the communist regime that was persecuting not only the southern Vietnamese, but also the ethnically Chinese population at the country’s northern border.

The sea was no friendlier to the refugees than the war zone they had left behind. Pirates preyed upon them, and calm weather could strand them for days. Many arrived in Hong Kong almost dead from hunger and thirst. When Bashall was appointed in April a few hundred were arriving each day, but by June their numbers had swelled into the thousands. “The highest number received in one day was indelibly imprinted in my memory,” he later said, “4,516 on June 10, 1979, in 42 boats. We were nearly overcome.”

Bashall arranged that upon arrival the refugees were led to a quarantined anchorage, where aid workers gave them clothes and papers and checked their health. To oversee this operation was to witness a daily succession of haunting scenes: children arriving in bloodstained clothes; a boy who had been strapped to the mast, about to be eaten by his starving crewmates; a mother holding her dead child. “It was almost beyond human comprehension,” he recalled.

As the weeks went by, however, he drew strength from the realisation that to every dilemma the situation created, a common-sense solution eventually presented itself. Whereas exhaustion and repetition might have numbed him to individual suffering, it did not; when a family asked if they could go to the morgue to close their mother’s eyes, he arranged for them to do so, even though multiple emergencies were at that moment competing for his attention. He was fortified by the stoic example of the refugees themselves.

A brief respite came when Muhammad Ali visited the camp. Few of the refugees knew who he was, but they were still spellbound by the boxer’s charisma.

Bashall oversaw the operation for three years, managing the arrival of more than 200,000 refugees. He insisted to the authorities in Hong Kong that none should be turned away, and none was. He also helped to negotiate resettlement of refugees to other countries. Wearing his club tie, talking one minute in cut-glass English and the next in Cantonese slang, he gave the impression of someone outside his natural habitat yet fully adapted to his new one.

In later life he kept up many close friendships with people from the Vietnamese diaspora, and, at the age of 85, was an honoured guest at the opening of a library for the Vietnamese community at the University of California, Irvine. He also received the Imperial Service Order.

Talbot Henry Bashall was born in Ripley, Surrey, in 1926, the son of John, a motorcyclist who competed in the Isle of Man TT, and May (née Dibble), a housewife. He went to Cranleigh School, which he said toughened him up, then on to Sandhurst. Passing out in September 1946, he was posted to Venice to be the personal guard of the captured German field marshal, Albert Kesselring, who was accused of war crimes for having overseen the massacre of 335 Italians in the Ardeatine caves in March 1944. Kesselring maintained that because the order had come directly from Hitler, he was powerless to stop the massacre.

The two dined together every day, striking up an unlikely bond and offering Bashall an insight into the functioning of the Nazi regime. Over a bottle of wine, Bashall realised that it was Kesselring who must have directed the bombers that he had heard passing over his school. One morning, as the two of them floated down the grand canal on the way to court, Bashall looked at him and realised, “My God — I’m living history.” The day that Kesselring was sent to prison, facing a death sentence that would later be commuted, he shook Bashall’s hand as tears filled his eyes and told him he would not forget the kindness he had shown him.

Bashall was then posted to Palestine where he witnessed the arrival of boats full of Jewish refugees and the growing clamour for an Israeli state. In 1948 he returned to England, left the army and married Cynthia (née Glegge Thomas), a Wren and horticulturalist at the RHS garden at Wisley. They had two children, Rebecca, a housewife, and Paul, a town planner.

Having attempted unsuccessfully to make a living out of forestry, Bashall accepted a position in the Hong Kong prison department, arriving there with his family in 1953. Working mainly in Stanley Prison, the biggest maximum security institution on the island, he also headed the city’s street-hawker control force.

In 1983, once the Vietnamese refugee crisis had subsided, Bashall retired to Perth, in Australia. He had decided while in Palestine that he wanted to live in a warm climate for the rest of his life, but he returned to Britain every couple of years for three months at a time. There he enjoyed watching cricket and sharing memories of Cranleigh School with his grandchildren, who also went there.

They called him “Grumpy”, and the mispronunciation stuck, even though he was nothing of the kind. An enthusiastic and sociable man, he believed in judging people only by their character, and living by the adage that “there are no strangers, only friends you haven’t met yet”.