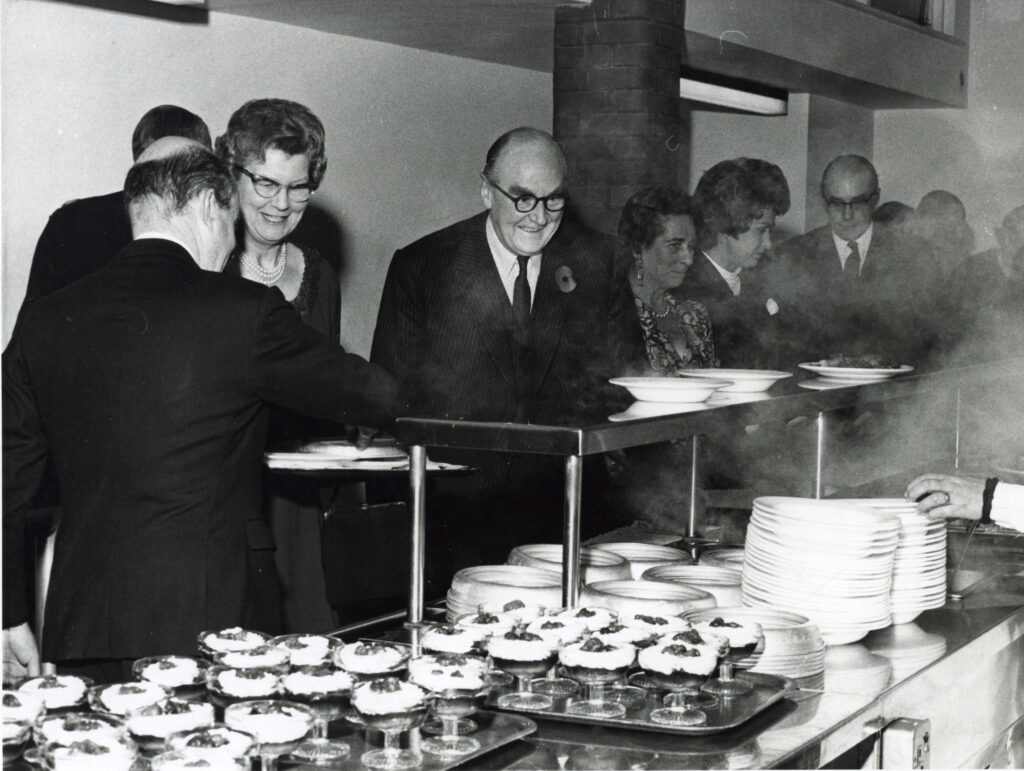 On 13 November, 1971 Cranleigh life underwent one of its most significant moments with the opening of the cafeteria, replacing after a little more than a century the system where houses sat together for all meals and food was brought to the tables in Hall. On the face of it now, it hardly seems a huge change but at the time it represented a seismic upheaval and, with hindsight, was possibly one of the most important changes in the School’s history

Previously the way meals were eaten was completely hierarchical, seating by houses and food served at the table by the prefects. For decades those at the top of the School got the quantity they needed, and got it first, while those at the bottom of the food chain had to make do with what was left. It could be a Spartan existence for the smaller boys who often went hungry. As the School expanded so it outgrew Hall, meaning some people had to eat in classrooms in the Connaught Block. School Prefects and Masters ate at tables on the dais at the top of the Hall. At breakfast milk was served out of massive churns.

Clearly something had to change. In his final interview for the Cranleighan shortly before departing to Sherborne in 1970, outgoing headmaster David Emms said that the cafeteria system was “such a vitally important project” for his successor. By 1971 life was fairer for the fourth formers but they still had to wait on the tables. Steve Williamson (2&3 South, 1975) recalled having to “get up early to lay the table, wait on table (i.e. serve), bolt your own food down once you had served everyone (hence why I eat so fast), then clear away everything and serve the next course.”

The threat of that task was a ready way to keep order as well. “A week’s waiting on table was the ultimate punishment,” said Martin Archer (2&3 South, 1975). Hall set out for meals with long tables accommodating each house, a scene unchanged for decades before the advert of the cafeteria and the set-where-you-like changes it brought Each meal was preceded by grace. “Every time ‘Squeak’ Dimmock said grace in his very high voice we all replied ‘Amen’ in equally high voices,” admitted Adrian Thomas (2&3 South, 1975).

The cafeteria changed all that as boys could sit wherever they wanted once they had queued for their meals. Lance Marshall, Cubitt’s housemaster was unhappy. “It encourages cultism,” he told the Cranleighan soon after the switch. “The rugger teams, the musicians, for example, all sit together, not occasionally but always, 21 meals a week.” For Paul Hands (2&3 South, 1972) that was no bad thing. “Gone is the agony of having to find words for somebody you can’t bear sitting next to.”

And for some the change came too late. John Bowden (Cubitt, 1973) recalled that the cafeteria arrived just as he reached the top of the School. “Having arrived in 19681 was just getting towards the end of the old formal tables where someone brought me the food and I got the better/bigger helpings having endured serving and clearing at the tables as a junior.”

The queuing system was not welcome and the food, the responsibility of a new chef, Giovanni Fontebasso, was also under the microscope. “Often one is forced to shuffle along for 10 or 15 minutes,” lamented Nick Andrews (1 North 1972), “and then one’s plate is graced by the presence of a rather small quantity of tepid or stone-cold food.” Andrew Hawkins (East 1976) added: “The toast is cold and soggy and there is one soup which tastes like gravy.”

The removal of the formality immediately caused unforeseen problems. “The queue offered all kinds of unlocked for opportunities for misbehaviour and humour,” said David Westcott (2 North 1975). “I remember the prefects tearing their hair out because pupils, who previously could readily be identified (and disciplined) if they caused trouble or noise at the foot of a dining table, could now hide amongst their peers in the unruly gaggle that approximated to the lunch queue.”

But the overwhelming memories were of the freedom to acquire additional food the change gave. “Cafeteria was always opportunity to steal bread and other valuable items,” Thomas said. “If you could provide toast in your study (without blowing the electrical circuit) you were instantly a fine chap. I remember Chris Sinclair (2&3 South, 1975) and someone whose name repeatedly occurred in his contemporaries’ reminiscences as being in a state of constant trouble!) donning a pair of bandido sunglasses and storming the place commando-style, putting two loaves under his arm and marching out. Straight into Franco’s outstretched arm who immediately relieved him of his bounty.”

Franco, who ruled the cafeteria and was much loved by generations of Cranleighans, is another that most recalled. “He acted as guard over the food and made sure that you didn’t take more than the prescribed amount,” Archer said. “You could get away with slipping an odd piece of toast or butter on your plate but anything more was not allowed. I do recall someone acting as the decoy, usually Sinclair again, blatantly stacking extras on to their tray fully aware that Franco or his cohorts would see. In the commotion that ensued others could slip by unnoticed.”

“The relative informality of the cafeteria system did allow whoever it was (damn… who was it?) to streak a year or two after its introduction,” said Ed Collins (2&3 South 1975), “and the streaker was followed by an incandescent Franco storming out after them as the streak was in front of his girlfriend/wife!”

For Chris Perryer (2&3 South, 1975) it was tea that left the abiding memory. “Those Chelsea buns, and the urns of stewed tea and standing around in games kit in the echoing hall with the bloody paintings of past headmasters, like faded monarchs. I never liked the cafeteria, it felt undignified and not special with the queuing and uncertainty about where to sit. The kitchen staff were much more visible though which was interesting; Franco with his thick glasses and his Italian cohort.”

Gradually things settled down and the cafeteria became as accepted a part of Cranleigh life as the previous system had been. Now it is hard to imagine life without it. And the food has even improved.