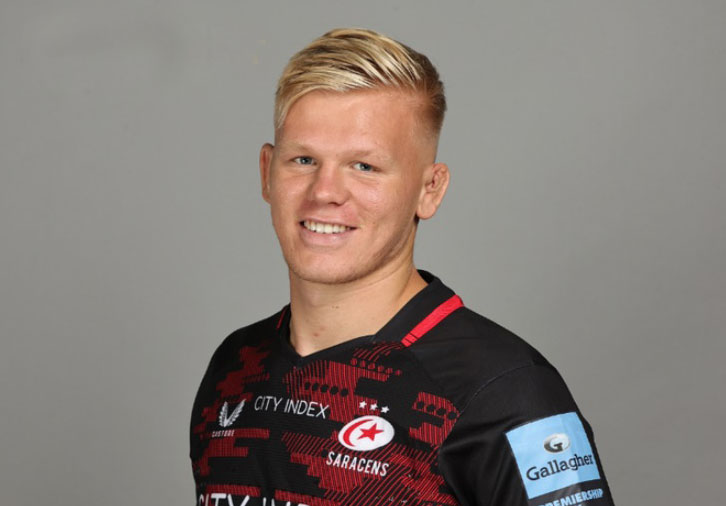 It’s been a busy few months for Hugh Tizard (Loveday 2018). In the summer he moved from Harlequins, a club he had been with since he was teenager and where he had become a first-team regular, to Saracens and this week he was included in the England squad for the autumn internationals.

Moving from The Stoop to joins rivals Saracens was far from easy. “It was a tough decision,” he said. “There are a lot of boys [at Quins] I went through the junior academy with, then lived in the academy house with. Some of my closest mates are still there.

“I wanted a fresh start, and to experience a new environment outside of my comfort zone. Working with world class coaches such as Mark McCall was also a big motivating factor for me. There is so much competition for places in this squad, but I’m confident I can give a good account of myself.

“A big motivation for me was to work with the senior players at this club who are international standard, and to really challenge myself. The standard that they set themselves you have to improve to keep up with them. I’m just trying to take little bits of their game and learn from them because they are so experienced.”

“I enjoyed last season but I’m aware I’m now in a new environment and need to prove myself all over again.”

Saracens had lost several established second rows as a result of the salary cap scandal and Tizard was recruited in early 2022 to help plug the gap, working alongside Maro Itoje and Nick Isiekwe.

“Maro’s a great mentor,” he said. “You can always come to him and ask him any questions regardless of how experienced a player you are. The questions I ask are mainly lineout based because he is one of the best lineout forwards in world rugby.

That recognition came sooner than expected when he was called into the 36-man England training squad ahead of November’s Autumn Nations Series fixtures. The Daily Telegraph enthused about his selection. “It is no exaggeration to say that the 22-year-old could storm into the first-team shake-up very quickly. He is an exceptional handler who distributes deftly on the gain-line. New colleagues were genuinely startled by his composure on the gain-line during pre-season drills.”

England and Saracens hooker Jamie George was another to predict greater things, telling the BBC signing Tizard was “an absolute steal … you could see him creeping into the England squad by the World Cup in a year’s time.